2 years ago (September 2016), we were just starting our journey by founding Niryo, a startup in robotics, knowing exactly what we were doing and where we were going (if only).

But our goal hasn’t changed since then : we want to democratize robotics.

We were just realizing that robotics can sometimes be incredibly complicated and so expensive. In schools, universities, small companies, the result was the same : robots (especially industrial robots) are not accessible at all.

With that in mind, we started to work on Niryo One, an open source, 3D printed, 6 axis robotic arm. The first days were all about creating a product that would be great and useful.

We quickly started to think about a Kickstarter campaign. This would be a great way to know if people are really interested in the product we have, or if we were just day dreaming.

And the thing is… We got 400% of our initial funding goal after only 45 days on Kickstarter in April 2017. This was a great market validation, and we were able to start a community around robotics projects.

After the Kickstarter campaign

Many people say : “when you’ve finished your crowdfunding campaign, the real work begins.”

This was a time when we faced many issues, and with a lot of hard work, determination, and your support, we were able to overcome the problems we had, one at a time.

We had to delay the shipping of the Kickstarter rewards, but in the end we were able to ship everyone with a much improved robot (compared to the one featured on the crowd-funding campaign).

In the summer, all the team went on full production mode, to be able to assemble and package all the robots. That was a fun experience. Everyone, from engineers to HR to communication staff (no, just kidding, we don’t have an HR yet) were doing his/her best to produce and test all the robots. 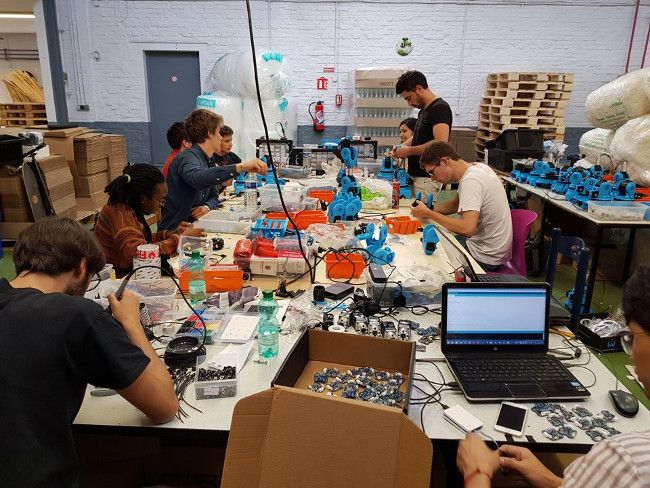 Now… And the future !

We have officially launched Niryo One a few weeks ago, and are continuing our efforts to please our customers so they have a great experience with the robot. This doesn’t end here, it only begins.

We are primarily focusing on educational field for Niryo One. You can’t imagine how many things you can teach and learn with the robot : 3D printing, programming, industrial robotics, Arduino, Raspberry Pi, ROS, and much more.

As we continue our journey with this robot, we are also experimenting on new projects. Follow us and you’ll soon hear about them!

And of course, our goal hasn’t change a bit : we want to democratize robotics, so everyone can benefit from it.